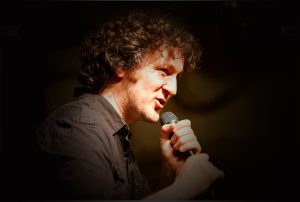 I am an Irish Stand Up Comedian living Antwerp who performs all over BENELUX. After years of street performing and improvising, I started stand up comedy in 2010.

Not only a regular in the Belgian comedy scene I also play in Luxembourg, Holland, Germany, UK and of course Ireland.

I tour Secondary Schools with my one man show “Expatie” and am currently working on a new show “Peaked in the 90’s” and I also offer Improvisation Workshops to groups and Schools.

“Expatie” is an interactive Stand Up Comedy show designed for Secondary Schools. Using comedy and multimedia we begin exploring where the Irish and BeNeLux culture differ, crossover and intertwine.

“Peaked in the 90’s” is a “Supersonic” show about growing up in the decade of Fresh Prince, Friends, Oasis (or Blur?), Nirvana & Pulp Fiction. Everything we got right and everything we got wrong.

With my strong background in improvisation I decided it was time to offer my experience in workshop format and I can cater for groups and schools.

I was Winner of “Comedy Kapers Cup 2016” (BE),  Semi Finalist of Playground Comedy Slam (NL) 2013, shortlisted for BBC New Comedy Awards 2012 (UK) and Finalist for “Show me the funny 2011” (IE) & Winner of (the much coveted) Battle of the Axe – Ha’ Penny Bridge Inn – Dublin 2010. Spent 3 years as Resident MC at the “Cafe Manger Saturday Night Comedy “ where I presented local and International acts.

I now play all over Benelux in various International comedy clubs to Expat audiences from all over the world. I also take part in various local comedy nights too, quite often the only English speaking act on the night. You can quite often find me in a tiny cafe somewhere in Belgium trying to hone some new material.

Every so often people who are looking for something a bit different ask me to perform for a private party or a corporate event. I’m happy to speak to you about your event and help you turn your event into a fun and interesting experience. I can create material on any topic you like and on a couple of occasions have created custom made comedy songs which I performed live at the event. I created the lyrics based on the info provided by the client and everyone can relate to that’s why its always a the highlight of the show.